The S1 Branch is responsible for all force structure, manpower, personnel, and administration requirements for the Regiment. The branch provides recommendations to command staff in resourcing current manpower requirements and in determining future organizational structure. S1 also advises and assists command staff in the management of personnel, personnel replacements, discipline, morale and welfare by developing personnel and administrative programs, policies, and procedures to support the commander's goals and objectives.

In the 7th Cavalry Gaming Regiment, S1 is similarly responsible for the administration of personnel. Material contributions are in record keeping, organization and policy. Unique to our virtual community, S1 also has responsibility for the visual representation of each trooper as a unique individual, through standards conformant avatars and signatures. S1 is divided into four sub-departments: MILPACS, Uniforms, Citations, Operations.

The S1 Department has various policies and procedures governing all aspects of military administration.

The S1 Branch was officially commanded by the Regimental Chief of Staff (CoS) until the formal stand-up of the S1 Branchead position in 2011, filled by then General John Chance. 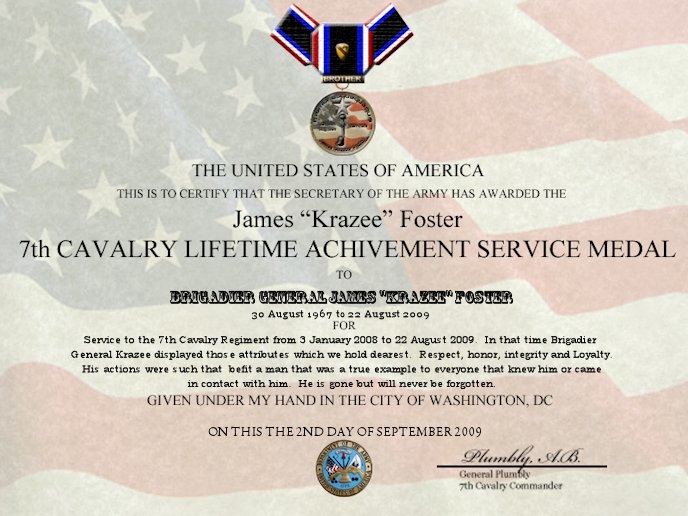 In 2008, when the Chief of Staff was the S1 Commander, Brigadier General James Krazee was appointed to the position. Throughout the next year, General Krazee began to formalize the processes of personnel and general administration, creating the pathway for the current S1 Branch. Tragically, in April 2009 General Krazee passed away. In his honor, the James "Krazee" Foster Lifetime Achievement Medal was created to honor him, and all those who have served the Regiment in an extremely dedicated capacity. He was the first recipient of this new award.

Today, the medal is awarded: "...for overall career achievements within the 7th Cavalry. This includes service to the unit in and out of combat roles. This award is exclusive to the Officer ranks, and is awarded in Honor of BG.Krazee". While not specifically for excellence in administration, the medal is awarded to all around Officers who have shown their dedication, leadership ability, integrity, and exceptional service to the Regiment.

A list of all previous S1 Branch Heads is listed below, beginning with the most recent.