Charlie Company's mission is to provide an environment for all future and current members to gather together to enjoy Hell Let Loose with one another. We host multiple weekly internal/external PVP events and conduct several School of Infantry classes designed to engage you with others inside and outside of our Company. 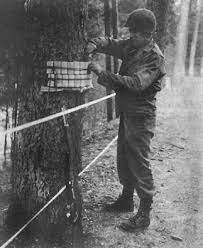 Combat engineers facilitate movement and support of friendly forces while impeding those of the enemy. Combat engineers build fighting positions, fortifications, and roads. They conduct demolition missions and clear minefields manually or through use of specialized vehicles. Typical combat engineer missions include construction and breaching of trenches, tank traps and other obstacles and fortifications; obstacle emplacement and bunker construction; route clearance and reconnaissance; bridge and road construction or destruction; emplacement and clearance of land mines; and combined arms breaching. Usually, a combat engineer is also trained as an infantryman, and combat engineer units frequently fight alongside the infantry or fight as infantry as a secondary mission.

The Infantry are experts in individual skill and teamwork coordination. Through larger platoon actions, whether in defense or offense, the infantry squad utilizes all member classifications to overwhelm the enemy and seize the objective. Members of the Infantry are masters in land warfare, communication, and tactical movement. In the Infantry, every member is a rifleman first and a specialist second. As a trooper, each rifleman will train extensively on marksmanship, control over their weapon systems, and team battle drills. Additionally, troopers train in coordination with other support elements to improve our combined arms operations.

The following is a list of troopers who made a significant impact on the overall health and morale of C/2-7.

The Company consists of 2 Homogeneous Platoons, and a Headquarters Section.