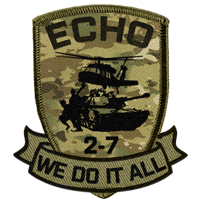 Echo Company, 2nd Battalion is a military unit of the 7th Cavalry focused on Squad. It is administratively known as E/2-7; this abbreviation is used in MILPAC and avatars (among other things). It is formed of two platoons.

Echo Company, 2nd Battalion is a modern company that deploys into AO's all around the world including, but not limited to: Afghanistan, Iraq, Pakistan, Russia, Ukraine, Georgia, Estonia, and Norway. Echo Company at is core is an infantry company with several specialized MOS's such as Armor Crewman(19K) and Pilots(15P)

The core of Echo company the 11B's are the infantry. They are the backbone of the company, leading attacks, mounting defenses, and supporting the other MOS's in the field of battle.

The Crewman, provides Reconnaissance and Security in combat operations. As a Crewman, members of this MOS are system experts on a variety of Main Battle Tanks as well as other vehicles, and dedicated to providing long range eyes and heavy firepower to missions and combined arms assaults. Whether rolling through town with closely-coordinated infantry squads, raining down fire from a tactically advantageous high ground, or thundering across the open plain to destroy enemy armor, the Crewman MOS is recognized by its fierce destructive effects on the battlefield and respected for its role as the guardian of other friendly forces on the ground.

The Pilots, provide much needed infantry transportation and logistics delivery to the front lines. Their role keeps the front lines supplied of ammunition and building supplies.