Bravo Troop, 1st Battalion is an Armor & Cavalry sub-unit of the 7th Cavalry's First Battalion. The purpose of Bravo Troop is to find, fix, and destroy the enemy through direct and indirect fire; as well as providing reconnaissance and surveillance and Health Service Support to the Combined Arms Battalion.

The 19K Military Occupational Specialty (MOS) Armored Crewmen is responsible to operate and maintain the M1A2 SEP V2 Main Battle Tank. Armor Crewmen are responsible to deliver the immense firepower of the M1A2 in combat, with great accuracy. 19K Soldiers are employed in 2nd Platoon only, and provide direct fire support primarily to Bravo Troop. However, M1A2 Tanks have been assigned to support other Infantry operations as well. Soldiers in this MOS also specialize in radio communications, mounted land navigation, routine maintenance and resupply. In Operations Other than War (OOTW), such as Counter Insurgency Operations (COIN), 19K Soldiers train to operate Vehicle Checkpoints (VCPs), conduct presence patrols and conduct convoy escort missions.

In the 7th Cavalry Regiment, Cavalry Scouts (19D) are assigned to 2nd Platoon, Bravo Troop. Cavalry Scouts are the "eyes and ears" of the Combined Arms Battalion Commander, and contribute to the Intelligence, Surveillance, Target Acquisition and Reconnaissance Capability (ISTAR). Cavalry Scouts are experts on gathering information on the enemy and ground via covert and overt means. Cavalry Scouts employ light or heavy platforms depending on threat and supported callsign requirements. In support of the Combined Arms Battalion, the Platoon can operate light reconnaissance vehicles such as the M1127 Stryker and HMMWV. In COIN missions, Cavalry Scouts conduct vehicle checkpoints, provide rear-area security (RAS), conduct presence patrols and provide convoy escort. Cavalry Scouts, upon completion of both days of the Cavalry Scout Course (CSC) may become qualified to direct Indirect Fires or Close Air Support (CAS).

68W Combat Medics are the Military Occupational Specialty assigned to provide lifesaving care throughout the spectrum of conflict, including during war down to the Platoon level. Combat Medics are trained in First Aid, Casualty Evacuation (CASEVAC), and operation of armored and un-armored Ambulances. Medics are sent to support all Combined Arms Battalion Companies, in a variety of circumstances. Medics can jump from C-130J Aircraft as part of an Airborne operation, or operate M113 Armored Ambulances in support of an Armored operation. 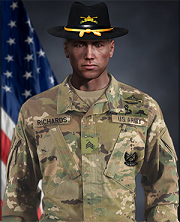 Bravo Troop is a Cavalry Troop comprised of Armored and Cavalry Scout Soldiers. As such, members of the Troop are authorized to wear the traditional Cavalry Stetson if they are qualified on either the M1A2 SEP V2 or M2A3 Bradley Fighting Vehicle. Soldiers who do not possess the Stetson wear the Black Beret with Regimental Flash. Soldiers who complete the Cavalry Scout Course may wear Spurs on their combat boots or dress boots while in garrison. Soldiers who complete either the Mechanized Infantry or Armored Career Pathway are authorized to wear the Master Gunner Badge on their uniforms, including on the Army Combat Uniform.

In late 2020, 3rd platoon was stood down and the Medical MOS was combined into 1st Platoon with the Tanker MOS.

In July 2022, the Tanker MOS was transferred to 2nd Platoon to provide the Troop with a more streamlined Direct Action Platoon. Due to this change, 1st platoon became a support Medical Platoon, and has remained so until today.

The Troop currently consists of 2 Platoons, and a Headquarters Section.