Charlie Company, 1st Battalion is an Infantry Company tasked with Air Assault and Airborne Operations. It is administratively known as C/1-7. The Company has two Platoons.

The mission of the Charlie Company is to close with and destroy the enemy with direct fires. Because of the Airborne capability, Charlie Company can conduct disruption operations in the enemy's rear area.

Charlie Company only employs 11B Infantrymen. 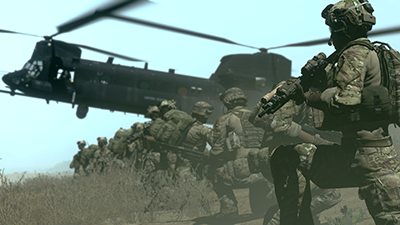 The Military Occupational Specialty 11B Infantryman is responsible for closing with and destroying the enemy. They are experts in squad-level battle drills and employment of assigned weapon systems. In Charlie Company, Infantrymen specialize in both Air Assault and Airborne operations, while also performing traditional light infantry and motorized tasks. Each Infantry Platoon within Charlie Company is comprised of up to three Light Infantry Squads and one Weapons Squad.

A Light Infantry squad employs weapons including the M4A1 Carbine, the M249 Light Machinegun, the M320 Grenade Launcher, and the AT-4 recoilless launcher. These squads act as the primary assault and maneuver elements within the platoon.

Each platoon also employs a Heavy Weapons Squad, which provides a base of fire for the rest of the platoon. These squads are trained to employ weapons systems such as the M240B Medium Machine Gun, the M3 Medium Anti-Armor Weapon System (MAAWS), and the FIM-92 Stinger Man Portable Air Defense System (MANPADS) among others.

Because of the Airborne designation, Soldiers of the Company refer to themselves as the "Tip of the Spear". This is because Airborne forces are capable of inserting into the enemy's rear area to disrupt their rear area operations ahead of a main mechanized force. Soldiers of the Company who successfully complete the Basic Airborne Course, also known as Airborne School are authorized to wear the Maroon Beret with the Regimental Flash.

The Company consists of 2 Airborne Infantry Platoons, and a Headquarters Section.