Alpha Company serves as the premier Aviation unit within the 1st Battalion, 7th Cavalry Regiment, a Tactical Realism Unit that strives to provide an environment of professionalism, training, loyalty, pride, commitment, and fun to all its members. We seek individuals who desire to become a member of our team of the highest qualified aviators, crew, and air controllers. It is administratively known as A/1-7, this abbreviation is used in MILPAC and avatars (among other things). It is formed of one platoon, with four sections, these consist of Alpha-Delta. Alpha-Charlie comprises multi-role rotary sections while delta is a multi-role fixed wing section.

The Company consists of 1 Multi-Role Aviation Platoon including 2 Multirole Rotary sections and 1 multi-role fixed wing section, and a Headquarters Section. 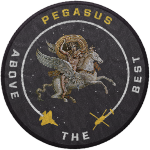